Although I already did a little work on xlsx file import performance at the beginning of this year's GSOC, Kohei and Markus have now changed my focus from ods import performance to xlsx formula import performance improvements.  Kohei made a large xlsx test file that contains one sheet with 5 columns and 20,000 rows of formula cells.  This file took a long time for the current master (LibreOffice 3.7) to load.  I did some profiling on the test file and saw one area of code that was unnecessarily being called repeatably which was wasting a lot of time during import.  So I made some changes and tested the load times.  The load time change was quite dramatic.

Please keep in mind these are not rigorously, scientifically performed tests.  They are just to give an idea of the improvements we are making.  I did these tests on a machine with a 3.2GHz AMD Athon 64 X2 Dual Core Processor 6400+ and 8GB of RAM running 64-bit GNU/Linux.  I used LibreOffice 3.5.4 and the latest build of my feature branch which gradually gets merged to master (LibreOffice 3.7). 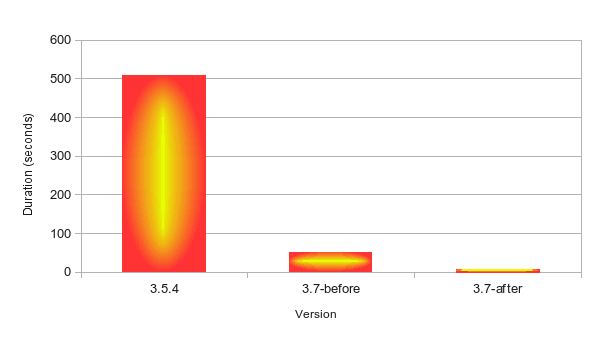